BBQ at the beach

During our holiday in June 2003 one night we were invited for a beach-bbq by a Greek friend of us (Yiannis), together with some colleagues of the school were his is a teacher. We arrived at 18.30 at an almost deserted beach, close to Oceanis. A lot of stuff was unloaded from the cars to build up the bbq-place: a table, chairs, a lot of plastic bags with all kinds of food and other stuff you need for a bbq; they only forgot a bottle opener, a corkscrew and matches. Fortunately we had a lighter, other wise we had to eat raw meat. You can also use a lighter to open beer-bottles. Of course there was enough to drink: beer, home-made beer, ouzo and tsipouro. We had brought some bottles of wine, but unfortunately we couldn’t open them. And of course there was meat: souvlaki, fish, pork and lamb, enough for 7 adults and 3 children.

They also had a cool-box and ice-cubes. What went into the cool-box? Yes, the beer, they left the meat out-side when it was still about 25 degrees. It was a lovely night. At about 10 o’clock a few people left, together with the children. We were then with five and stayd till 1 o’clock. At midnight there were some thunderstorms all around us. A marvellous view, all those lightning at the sea. We spent the time with eating, drinking and philosophical conversations, those who often start after some ouzo and tsipouro. When a beautiful orange moon rose, the Greeks couldn’t control themselves and started singing. Fortunately they don’t bring out cd’s of this songs. At 1 o’clock we cleaned everything; yes, not all the Greeks leave everything behind. Yiannis drove us to our apartment. Fortunately it is a very wide road to Kos-town. 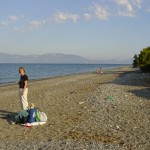 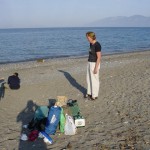 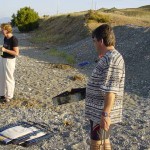 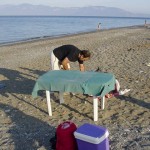 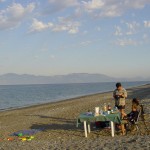 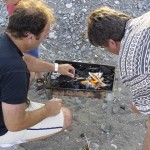 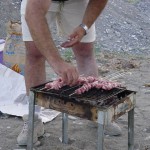 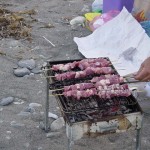 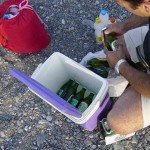 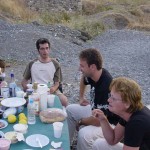 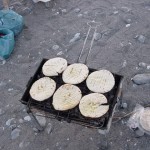 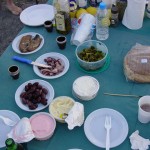 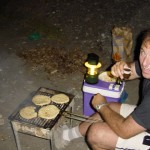 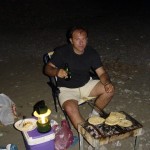 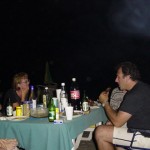 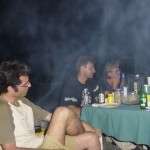 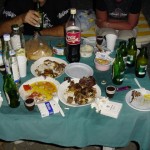 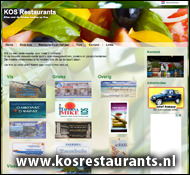